The National Finals Rodeo is set to take place in Las Vegas, Nevada from December 5th to December 14th. The competition is organized by the rodeos’ major North American governing body, Professional Rodeo Cowboys Association (also known as PRCA). The PRCA organizes the NFR as a championship event to award international titles among 120 contestants competing within several high-difficulty rodeo events. The contestants compete in various rodeo competitions across the United States for a chance to qualify for this event. Once a part of the event, the competitors typically strive to become a PRCA World All-Around Champion. 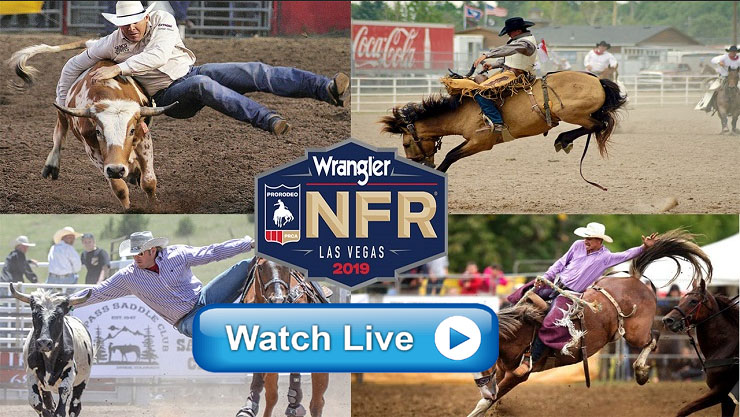 Long before the Dallas Cowboys were winning Super Bowls in American football, real-life cowboys were competing in the “Super Bowl of Rodeo” in Dallas, Texas as early as 1959. The seven-competition tradition began there, but also saw stops in Los Angeles, California from 1962 to 1964, Oklahoma City, Oklahoma from 1965 to 1984, and finally to its current location of Las Vegas since 1985. It wasn’t until 2001 that the event received its first major sponsor in the form of Wrangler, an American-based jean manufacturer that specializes in jeans fit for rodeo use.

Rodeo fans are eagerly waiting to see the event live. The National Finals Rodeo is not the only showcase of the best cowboys but also showcase of patience, bravery and spurs.

How to Watch NFR Live Stream

Finding a place to watch the Wrangler NFR live stream online can be hard to find as it is not well advertised. The live stream will be shown on the CBS Sports Network app as well as Pro Rodeo TV. Both places will have great service and you will be able to watch all 10 straight nights of high flying action without any interruption.

CBS Sports Network has the rights to this year’s NFR in Las Vegas. The network will be airing coverage of the event from December 5th to the 14t at 10 PM EST/ 7 PM EST on their network. This is great news as fans all across the United States can easily watch their favorite cowboys compete for World Championships and if they do not have the CBS Sports Network they can head down to their local bar to watch the action. CBS brings a great crew every single year and they will bring great coverage as well as interviews of your favorite cowboys.

ProRodeoTV is a great option to watch the National Finals Rodeo if you do not have cable. The cost per month is less than $7 which is the cheapest option if you are just looking to watch rodeo. They have coverage of rodeo events almost every single week from around the United States. The service only costs $80, which is a great deal to watch 10 straight nights of rodeo.

Steve Kenyon and Wade Wheatley will be hosting coverage of the 2020 Wrangler NFR this year on Sirius XM’s Rural Radio. They will be covering every single night of the rodeo and they will do an excellent job as they have done in years past.

Randy Corley and Wayne Brooks will be announcing this year’s Wrangler NFR for ten nights in a row beginning December 5th. Corley and Brooks have announced the National Finals Rodeo for five straight years and they will make it six years this December. Roger Mooney will be joining the team for his first year and should be an exciting addition to the team.

You can also purchase ProRodeoTv as well. That would be the most cost effective method if you plan to watch rodeo throughout the year.

There are only 2 ways to watch the National Finals Rodeo outside of the USA. The first way is to sign up for a VPN and then get the free trial of one of these apps that offer the CBS Sports Network: DirecTV Now, Sling TV, YouTube TV, Hulu with Live TV, or PlayStation Vue.

The other way is to sign up for Pro Rodeo TV which is a great service. There are no country restrictions on the website so you are free to watch it whether you are in Canada, Mexico, United Kingdom, Australia, or Brazil.

In order to qualify for the NFR, you must be a part of the PRCA (Professional Rodeo Cowboys Association) and be one of the top 15 in prize money for the year. There are 7 different ways to qualify for the National Finals Rodeo in Las Vegas. The events are: All-Around, Bareback, Steer Wrestling, Team Roping, Saddle Bronc Riding, Tie-Down Roping, and Bull Riding. Barrel Riding is another event featured in rodeos but they do not compete in the Wrangler NFR in Las Vegas. Steer Roping is another world final event but it occurs at the National Finals Steer Roping that typically occurs during the first weekend in November.

The payout for the 2020 National Finals Rodeo in Las Vegas is giving out $10 million dollars is prize money. Each contestant in the NFR is given $10,000 for qualifying so the amount that can be won during the competition is $8.8 million dollars. Each event has a payout of $1.1 million dollars which is why this is the biggest chance for competitors to take home a huge pot of money and increase their total winnings for the year.

The schedule for this year’s National Finals Rodeo is going to be jam-packed with amazing events and special nights. There will be something for every fan such as Canadian night and the Cowboys will be showing off their incredible talents in their respective events.

If you want to watch nfr highlights then Youtube nfr video and Roartube national finals rodeo highlights be available for fans to watch and enjoy.

The NFR has an allotment of amazing events that entertain all rodeo fans across the US and the world. The best of the best will be competing to try and win a world championship. In order to win a world champion the cowboy must have the most total prize money at the end of the season. The Wrangler NFR has such a large pot that the winner of the event is generally the world champion.

This is an extremely entertaining event. A steer is released into the arena and then a rider rides his horse into the arena just after the steer is released. The rider, also known as a bulldogger, then has to grab onto the steer’s horns and take the animal down onto its left side to stop the timer. Curtis Cassidy, Tyler Pearson, and Scott Guenthner are three of the top bulldoggers that are competing.

Team roping is the only true team event at the rodeo. Two riders have to try and tie up a steer by both his head and his feet. The rider that ties the steer up by his head is known as the Header and the rider that ties the steer up by his feet is known as a Heeler. The header has to get his rope around the steer before the heeler can try and rope the steer’s feet. Once both the head and feet are tied up, the riders have to face each other to stop the clock. Clay Smith and Junior Nogueira are the top team that is expected to take home the world championship.

Saddle Bronc Riding is one of the most entertaining events in rodeo. The rider of the horse has to use his skills and strength to ride a bucking horse for eight seconds and show great control and balance during those eight seconds. The rider can only use one hand to grip onto the horse and a smooth ride is a better score than a rough ride. Jacobs Crawley and Ryder Wright are expected to compete for the world championship.

Tie-Down roping is one of the more controversial events at the Wrangler NFR. The rider has to tie up a calf for the timer to stop. The calf is released into the arena and given a head start and then the rider has to rope the calf’s head and then dismount the horse to tie the calf’s legs up. If the calf stays in the knot for more than 6 seconds then the timer will stop. Shane Hanchey and Tuf Cooper will be competing for this world championship.

Bull riding is arguably the most famous rodeo event, the average person first thinks of this event when they think about the rodeo. The premise is simple, the rider has to stay on the bull for as long as he can and the one who stays on the longest wins. Sage Kimzey is the leader in this field having won 4 world championships in bull riding already at age 22. He is the favorite to win and will be looking to win his 5th championship.

The Wrangler NFR always has a great opening ceremony filled with excitement and enthusiasm. Generally, a top country music act performs the american rodeo live during the opening ceremony to get the fans excited and kick off the event with a bang. The musical act has not been announced this year yet. All of the cowboys competing at the NFR come out riding their horses and showing off their state’s flag or country’s flag.

The Cowboy Christmas is held at every single Wrangler NFR at the Las Vegas Convention Center. The event showcases some of the best equipment and experiences that every cowboy would want. rfd tv rodeo live It runs from December 4th to the 14th from 9 AM to 5 PM and you can even meet your favorite rodeo competitors. Make sure that you make time for this amazing event and bring your wallet because you will want to buy everything.

The Junior National Finals Rodeo takes place at the Las Vegas Convention Center at the same time as the Cowboy Christmas. There are various events throughout the day with different age groups competing on different days. This is your chance to check out the cowboys of the future and see the bright and young up and comers. You can check out the schedule here.

The Miss Rodeo America Pageant is one of the time-honored traditions at the Wrangler NFR. The pageant starts four days before the competition starts on December 2nd and runs until December 9th. The pageant finals take place on Sunday, December 9th from 10:30 AM to 12:30 PM at the Tropicana Las Vegas. RFD TV Rodeo fans should check out the event as they will not have to miss any rodeo events to watch.

This is an awards ceremony that celebrates several high-profile awards won by females within rodeo during the calendar year. This ceremony has traditionally taken place at the Grand Ballroom of the South Point Hotel and Casino and provides a great opportunity to shine a light on the often-overlooked female contributions to rodeo.

The Wrangler National Finals Rodeo season tickets have been sold out for 26 years straight. There is a currently a waitlist if you want to apply to be a season ticket holder. There are still individual tickets available for certain nights but they are going to be sold out soon so buy your tickets as soon as you can.

There will be a lot of entertainment happening around Vegas during the Wrangler NFR. All of the biggest country acts in the music industry will be performing from George Strait to Georgia Florida Line. A lot of the big hotels and casinos will also be putting together special events just for rodeo fans so make sure you do not miss out!

Make sure you check out our other articles on all of the music acts and late night entertainment that Vegas is putting on for the NFR.

The 2020 National Finals Rodeo is going to be an absolutely incredible event filled with fantastic rodeo events that every cowboy will enjoy. Las Vegas is the perfect venue for the Wrangler NFR as there is plenty to do and a lot to see while you are visiting. Which cowboy are you excited to see in December? Let us know in the comments!